Everything Is Vague Until You Make It Precise

The Hospital for Dazed Art is a series of conversations and informal surgeries initiated by Iain Sturrock and Delia Baillie that explores why artists (secretly) retain certain works in their studios for years at a time without publically showing / recycling / or trashing them, and what this means in terms of editorial integrity. The exhibition at The Briggait will showcase nine artists whom The Hospital has worked with during 2012 and 2013.

“Ideas, as far as there are any, have one terrible quality: they are hardly if at all transferable. Even the mere transference from so-called head to mouth is attended by such breaking, losing, binding, unbinding, darning, patching, sticking, tearing, picking, flapping, mending and padding, that the soaring eagle of thought is reduced to the moulting skin of a wren.” Miroslav Holub

The Czech scientist and poet Miroslav Holub had, to put it simply, two callings:  immunology and writing. Knowing this gives a different slant to Holub’s use of the word transference – it becomes as much a physical term as a psychological one. And this act of transference is the work of artists; they make public emanations of what were simply (?!) ideas, i.e., electrical signals within the dark soup of the brain. Holub’s sardonic take on this journey from the maker’s mind to an audience’s thoughts, with all its breaking, darning, flapping and padding, is a poets take on a process that visual artists know too well.

These conversations sprang from us discovering two works on paper (hidden/ forgotten in the bottom of a plan chest) that we had edited out of a group of collaborative works. These two pieces struck us as being far better than the works that we had actually hung for public viewing. This is not to say that our editing was haphazard – we had exhaustively discussed what would be shown and in what arrangement they would be hung. This (all but accidental) revelation led us to instigating our rolling collaboration The Hospital for Dazed Art, whose imaginary doors opened during 2012 whilst we were on residency in Edinburgh, at Project!!Wakaka!

The Hospital initially engaged artists on the subject of works that had fallen just the wrong side of an edit, or at the time were viewed as interesting failures – but nonetheless had been stubbornly retained: they had survived the periodic clear-outs that artists do to reclaim their studios and head-space. We had no criteria for these meetings beyond a curiosity as to why an artist’s perceptions of a piece could evolve whilst the work itself, in the strict and silent privacy of its studio / folio shallow grave, had remained in stasis. Curiously, rejecting our own work is as much an act of integrity as accepting it – and both these respective judgement calls are predicated upon a lack of sentimentality: you have to kill your darlings. Why then hold on to certain works?

As our initial question had been, at its simplest, “what are you hiding?” what followed unearthed far broader discussions on the private / public nature of making art and subsequently opened out into a huggermugger mix of considerations upon the subjects of time, self-consciousness, professional contingency, hoarding and editorial integrity. Some of these insights are recorded in the edited transcriptions that follow this preface and they are alternately funny, serious and querulous. They offer a window onto a profession that is ironically, if not bizarrely invisible – in the visual arts there is no televisual equivalent of behind-the-scenes documentaries a la…the working lives of midwives / ballet dancers / firemen, etc., and this is for the simple reason that actually watching artists at work is stunningly boring. It is one of our visually obsessed culture’s most soaring ironies that its means of visual production is hidden because it is so prosaically and unironically caught up in adults (often on their own) thinking, incrementally moving their hands and arms around a little, and wait for it…thinking some more. Our culture may be drenched in the visual ephemera of artists and designers but you really don’t want to watch us at work. And the profession’s paradoxical lack of visibility can be compounded by it’s worst habits – the visual arts can commit crimes of such wonkish exclusivity that it leads the public to feeling that they are on the outside looking in at something that only the specialists themselves can decipher (1). Jean Renoir may have wrote that “artists are the ones who tear down the screens”, (and this is all very stirring and beautiful) but artists can also be the ones busily erecting the screens, uncorking the bottle, and congratulating themselves upon their lack of…well, not to put too fine a point on it…you.

At this juncture it’s worth recognizing that a profession’s ability to generate bafflement or mistrust is not a unique attribute of contemporary visual arts practice; the impetus for questioning specialisms other than our own is endemic in a society of non-generalists surrounded by things we can’t fix and vocations we haven’t trained in. For example, a mechanic may loathe the vernacular embonpoint of your retro-styled next generation VW Beetle, but he / she can fix it when it breaks down. You may love the look and colour of your shiny Beetle without needing to know how your car’s particular hue is the endpoint of electrostatically charged spray paint being filtered through the minds of VW designer-monks whose lives are expended in colour-psychology addled focus groups. In our society, it is as natural to object to an aesthetic whilst nonetheless being able fix what’s under the hood, as it is to know that something is simply enjoyable whilst remaining in ignorant bliss of its aesthetic provenance.

And this points to one of the responsibilities that artists have in transferring the art in their heads into the minds of their audience – in the visual arts the judgement calls between purpose and worth / cowboy and expert are comparatively difficult to make. If your car ain’t working, it’s unsettling: having to debate whether it is even a car at all is openly annoying – and it’s this latter form of question that contemporary art often finds itself raising, as it schleps around the globe toting its lack of a universal grammar and its never ending blizzard of available vocabulary.

So…it should come as no surprise that artists themselves can find the profession problematical to contemplate, never mind traverse – whilst the title for our collaboration, The Hospital for Dazed Art carries its own sardonic freight (the conversations with the artists were often funny, if not libelous) it also reflects that artists can find the whole unbinding-darning-picking thing an inadvertent means of making their own practice invisible to themselves. In reality, The Hospital is neither a panacea nor therapy for artists, but merely a means of beginning a conversation about a profession that is at its worst, exclusive (to both the makers and the audience), but is at its best an immersive experience for everyone.

(1) We recommend David Levine’s and Alix Rules’ International Art English essay, Triple Canopy, for an example of artists themselves puncturing a groaning bladder full of pee / also; Melissa Gronlund, A Pedantry of Nouns, Cabinet, issue 41 for a surprising corollary in the language of medieval hunting. 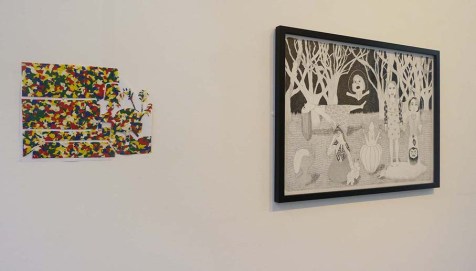